GET READY! It's time for Medicare Open Enrollment. Our partner, GoHealth, can help you plan with confidence. Learn More.

The highest inflation rate in 41 years is expected to drive the largest Social Security Cost-of-Living Adjustment (COLA). Social Security benefits are expected to increase 10.5% starting in January 2023, according to the League of Senior Citizens — a nonprofit, Virginia-based consumer organization.

This means, the average monthly check of about $1,658 would increase to a little over $1,833 in January, if the inflation rate remains steady.

The Consumer Price Index (CPI) — the United States’ gauge of inflation — released on July 13, surged to 9.1% over the same time last year. That’s the highest inflation rate since November 1981.

In any scenario, the COLA is expected to be well above all the increases over the past 10 years. 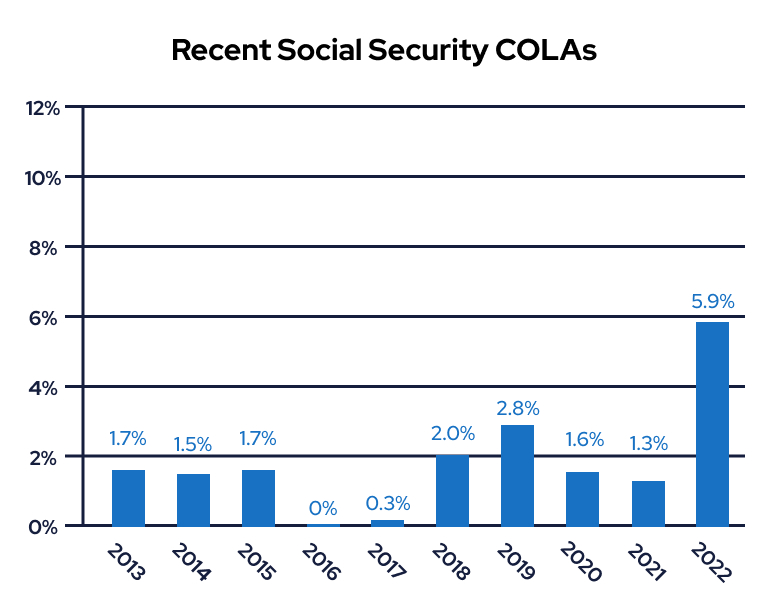 Inflation’s Other Impacts on Retirees

Inflation creates a cascading set of problems for retirees beyond Social Security.

Inflation with rising Medicare premiums can eat away at your Social Security benefits over time and the COLA can end up costing some people in higher taxes.

Most of this increase was due to the cost of covering a new Alzheimer’s drug — Aduhelm. But Medicare overestimated its cost for the drug and is expected to adjust the 2023 Medicare Part B medical insurance premium downward in 2023.

“After receiving [the Centers for Medicare and Medicaid Services’] report reevaluating the 2022 Medicare Part B premiums, we have determined that we can put cost-savings directly back into the pockets of people enrolled in Medicare in 2023,” Health and Human Services Secretary Xavier Becerra said in a statement.

Part B premiums are typically withheld directly from Social Security benefits before you get your monthly Social Security check, so the adjustment could mean even more cash in your bank account from SSA each month.

But that doesn’t mean the extra cash will help you keep up with inflation.

Medicare Part B medical insurance premiums rose almost three times faster than the Social Security COLA between 2000 and 2020, according to a 2021 study from the Center for Retirement Research at Boston College. 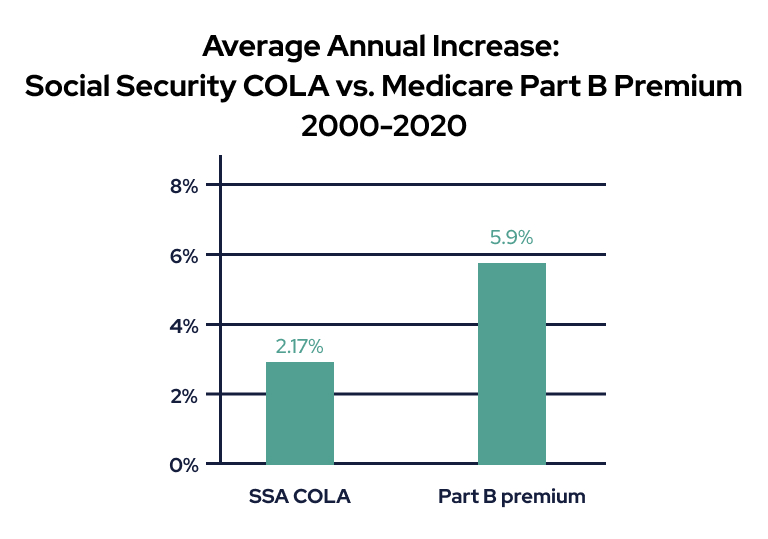 Researchers found that the COLAs were losing ground in the long run to higher premium costs.

Large percentage increases in the Social Security COLA in 2022, and expected again in 2023, are pushing more Social Security recipients over tax thresholds — meaning, they must pay higher income taxes.

Social Security benefits have lost 40% of their buying power since 2000, according to a May 2022 study from the Senior Citizens League. In other words, it would cost you $100 today to purchase what $60 would have in 2000.

This is the core effect of inflation on all consumers, but it shows how Social Security COLAs have not kept up with rising costs over time. Retirees also face reduced buying power from their retirement savings they’ve socked away — sometimes for decades.

Four out of five Americans now cite recession and inflation worries as their top retirement concerns, according to a July 2022 survey of 2,025 Americans ages 45 through 75 from the nonprofit Alliance for Lifetime Income.

Top Concerns of Americans Planning for or Already in Retirement

There’s also a new emphasis on finding ways to hedge against inflation in retirement. A second ALI study found that 82% of financial professionals surveyed cited inflation as the leading reason they changed their approach to retirement planning in 2022.

How Is the Social Security COLA Calculated?

Though the Consumer Price Index (CPI) is running at 9.1%, the Social Security COLA is now expected to be a higher 10.5%.

This is because the Social Security Administration uses a specific database of the Consumer Price Index (CPI) to determine the COLA.

The 9.1% inflation rate is based on the CPI-U from the Bureau of Labor Statistics. This is what you generally hear reported when the Consumer Price Index numbers are announced. The CPI-U tracks retail prices that affect all urban consumers — about 87% of the United States’ population.

Social Security relies on another measure of CPI from the Bureau of Labor Statistics — the Consumer Price Index for Urban Wage Earners, or CPI-W. This measures the monthly change over time in prices urban wage and clerical workers pay for a very specific list of consumer goods and services.