Our fact-checking process starts with vetting all sources to ensure they are authoritative and relevant. Then we verify the facts with original reports published by those sources, or we confirm the facts with qualified experts. For full transparency, we clearly identify our sources in a list at the bottom of each page.

Cite Us
How to Cite RetireGuide.com's Article

Why Trust RetireGuide.com
Why You Can Trust Us
Content created by RetireGuide and sponsored by our partners.

RetireGuide’s mission is to provide seniors with resources that will help them reach important financial decisions that affect their retirement. Our goal is to arm our readers with knowledge that will lead to a healthy and financially sound retirement.

We’re dedicated to providing thoroughly researched Medicare information that guides you toward making the best possible health decisions for you and your family.

Our partners are able to be reached through the phone numbers and/or forms provided on our website.

The content and tools created by RetireGuide adhere to strict Medicare and editorial guidelines to ensure quality and transparency.

While the experts from our partners are available to help you navigate various Medicare plans, RetireGuide retains complete editorial control over the information it publishes.

We operate independently from our partners, which allows the award-winning RetireGuide team to provide you with unbiased information.

Visitors can trust our inflexibility regarding our editorial autonomy. We do not allow our partnership to influence RetireGuide’s editorial content whatsoever.

Why Does Medicare Have Late Enrollment Penalties?

Like most health insurance plans, Medicare depends on healthy people paying into the program to pay the health care costs of those who are unhealthy.

Delaying enrollment would mean newly eligible people may not sign up until their health declines. This would increase the price of premiums for everyone enrolled in Medicare.

People who don’t qualify for premium-free Medicare Part A hospital insurance have to buy it. If you miss your enrollment period, you will also have to pay a penalty on top of the premium.

If you paid Medicare payroll taxes for at least 10 years, you should qualify for premium-free Medicare Part A. There is no late enrollment penalty for that situation.

Medicare Part A and Part B Open Enrollment
You have seven months around your 65th birthday to sign up for Medicare Part A and/or Part B. Open enrollment begins three months before your 65th birthday month and ends three months after your birthday month.
Source: Centers for Medicare & Medicaid Services
Don't Leave Your Health to Chance
Find a local Medicare plan that fits your needs by connecting with a licensed GoHealth insurance agent.
Get FREE Help Now

If you didn’t sign up for Medicare Part B during your open enrollment period, you will have to pay a 10 percent penalty for each 12-month period you waited to sign up. Medicare Part B covers doctor visits and other medical services.

So if you waited for three years after your open enrollment period, you’d have to pay a penalty equal to 30 percent of your premium on top of that monthly payment for as long as you have Medicare Part B.

Part B Coverage Delay
Medicare Part B doesn’t kick in until three months after you enroll. If you wait until your 65th birthday, or anytime in the next three months of your open enrollment, you may experience a gap in medical coverage.
Source: Centers for Medicare & Medicaid Services
Advertisement

Enrolling in Medicare Part D prescription drug coverage is voluntary. But if you don’t sign up for it when you’re first eligible, you may have to pay a penalty if you enroll later. You’ll have to continue paying the penalty for as long as you have Medicare Part D.

The Part D late enrollment penalty is determined each year through a math formula. The formula uses something called the “national base beneficiary premium.” This amount is based on an average bid insurers submit to the Part D program and the number of people enrolled in each plan.

The penalty is determined by multiplying one percent of that figure, rounding up to the nearest $0.10 and multiplying that number by the number of months you waited to sign up.

For example, if your open enrollment period ended on New Year’s Eve 2014, but you waited until mid-December 2019 to sign up for Part D, here’s how your penalty would be calculated for 2020 when the penalty was $32.74 per month. 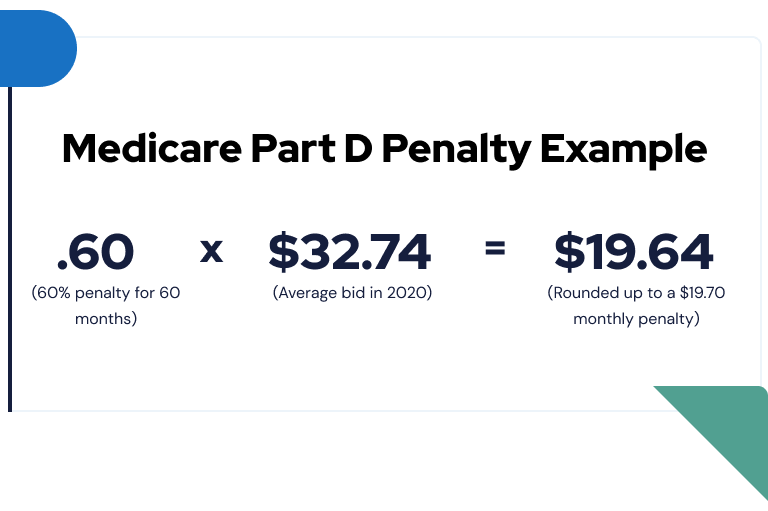 How to Avoid Medicare Late Enrollment

If you don’t have health insurance, the simplest way to avoid Medicare Part A and Part B late enrollment penalties is to sign up during your open enrollment window.

But if you have health coverage through your or your spouse’s employer and want to keep it for the time being, you may qualify for a special enrollment period later on.

If you’re covered under a private group plan, your Medicare Special Enrollment period is either:

How to Avoid the Medicare Part D Late Enrollment Penalty

If you don’t sign up for Medicare Part D prescription drug coverage, or a Medicare Advantage plan that includes drug coverage you could be stuck with a penalty if you change your mind later on.

But there are ways to avoid the penalty.

On This Page
Don't Leave Your Health to Chance
Find a local Medicare plan that fits your needs by connecting with a licensed GoHealth insurance agent.
Get FREE Help Now

Calling this number connects you to one of our trusted partners.

If you're interested in help navigating your options, a representative will provide you with a free, no-obligation consultation.

Our partners are committed to excellent customer service. They can match you with a qualified professional for your unique objectives.

We/Our Partners do not offer every plan available in your area. Any information provided is limited to those plans offered in your area. Please contact Medicare.gov or 1-800-MEDICARE to get information on all of your options.