Nearly one-third of Americans have made a withdrawal or taken a loan from their retirement savings account to make ends meet during the COVID-19 pandemic, according to a new survey from Kiplinger’s Personal Finance and Personal Capital.

“It’s sort of the way that American retirement savings are structured now that so many assets people have are in retirement accounts,” Mark Solheim, editor of Kiplinger’s Personal Finance told RetireGuide. “That’s the money they have control over and that they can tap when they’re in desperate straits.”

The CARES Act, passed in 2020 in response to the COVID-19 pandemic, allowed people to withdraw up to $100,000 from their IRAs, 401(k) or similar retirement savings account without a penalty. It also allowed people to take out loans from their accounts up to the same amount.

The survey found nearly one in three people who withdrew or borrowed from retirement accounts took out between $75,000 and $100,000.

The survey from Kiplinger’s Personal Finance magazine and digital wealth management firm Personal Capital also found the pandemic is changing the way Americans are planning for retirement — from planning to work longer to increasing savings.

Tapping into Retirement Savings to Live

More than 40 percent of survey respondents reported they had either been laid off or had their hours reduced during the pandemic. That appears to be a driving factor behind so many people using money they saved for retirement to pay for current expenses.

Helping family members, along with paying medical bills, appears to suggest additional financial pressures piled onto families by the pandemic.

“Among people in the survey, 41 percent said they used retirement savings for medical bills, and between job loss and the deadly coronavirus, that was a very significant usage for the money,” Solheim said.

At the same time, some expenses such as transportation to and from work, dining out and entertainment decreased significantly due to people working from home and restrictions on socializing and travel. People reported travel expenses dropping 57 percent.

Americans appear to be banking much of their savings from these decreased expenses. The U.S. Federal Reserve reported in December 2020 that savings as a percentage of disposable income hit a record 33.7 percent — up from just 7.2 percent in 2019.

“It’s not clear if people used these savings to contribute more to their retirement savings or not, but they are, at least, putting money in the bank, at least giving them emergency funds and cushions,” Solheim said.

COVID-19 Changing How People Think About and Plan for Retirement

The survey found that the pandemic and related economic issues have caused 66 percent of respondents to make changes to their retirement planning. Most said they’ll have to save more and work longer before retiring.

“That shows they’re recalibrating and being realistic about their prospects. But how long can we expect Americans to work?” Solheim said. 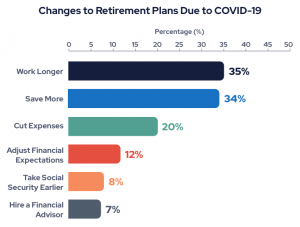 “Tapping into retirement savings is something that, overall, means we have a retirement issue long-term as Americans,” said Amin Dabit, vice president of Advisory Services at Personal Capital.

Dabit doesn’t believe it’s a big concern just yet, but he suggested people should slow down and take a serious look at their financial situation before borrowing or taking loans from their retirement savings.

He advises his clients to assess their overall finances, their spending and how far away they are from retirement. These are part of what his company refers to as a 360-degree view of its clients’ financial situation.

“Being able to visually identify those things, to understand where you stand financially, is critical to start wrapping your head around your situation and then you can define your goals,” Dabit said.

How to Protect Your Retirement Planning Through the Pandemic

The biggest thing that people should do right now is to take immediate control of their financial situation, according to Dabit.

“Focus on what you can control — not on what you can’t control — and by doing that, it will relieve stress, relieve uncertainty that we’re all facing and it will help you make better decisions today,” he said.

A significant number of respondents to the survey — 34 percent — said they are not changing their retirement plans because of the pandemic. Solheim sees that as good news for retirement savers.

“There are a significant number of people who are doing things right. But you want that percentage to be higher,” he said.

Having a solid retirement plan and sticking to it in times of crisis can head off the need to tap savings or make serious changes when unexpected events from recessions or pandemics strike.

“I would wish for more retirement savers to have a plan and just leave things where they are, on track, because the market has always gone up eventually,” Solheim said.

Dabit also suggests that people planning for retirement should take time during the pandemic to take charge of their retirement — while their future finances are top of mind.

“This is really an opportunity for Americans to take the time to think about a long-term financial plan while it’s front and center,” Dabit said. “If you don’t take action now, then you may end up delaying that action for years.”